Limnos is famous among the islands of the North Aegean Sea for its dazzling beaches. With more than 260 kilometres of coatline, Limnos is one of the four Greek islands with the most numerous and lengthiest beaches, the majority of which are covered with fine sand and are ideal for swimming. For more than a decade, the so-called Island of the Winds has become one of the most popular holiday destinations in Europe, attracting lots of visitors from all over the world, especially those who are interested in water sports, such as surfing, windsurfing, kitesurfing as well as scuba diving, fishing, boat rentals and so much more! It offers such a great variety of water activities that it is almost impossible to get bored in Limnos. Recreational water activities are no longer something that only the privileged few can afford, but it’s a must experience for all Limnos visitors!
Limnos is a fishing paradise, particularly for those who love spinning, as the sea around the island is rich in fish, shellfish and mollusks. Although spinning and light rock fishing are not so popular with the locals, there are actually various beautiful fishing spots and plentiful fishing opportunities on the island. You could also try scuba diving, spearfishing, traditional boat fishing or net fishing throughout the year, given that all these recreational activities are equally enjoyable any season. There are hidden gems and natural treasures on every beach on this marvellous island. In some of them, you will be able to relax, listen to music and enjoy delicious ice creams, refreshing cocktails or coffee in one of the beautiful beach bars. The island’s sandy beaches and the crystal-clear sea can definitely take your summer holidays to the next level!

Are you planing your vacation?

Limnos is the perfect place for you!

This lovely island disposes almost 30 villages, however, in this Guide, we will present the bigger ones. 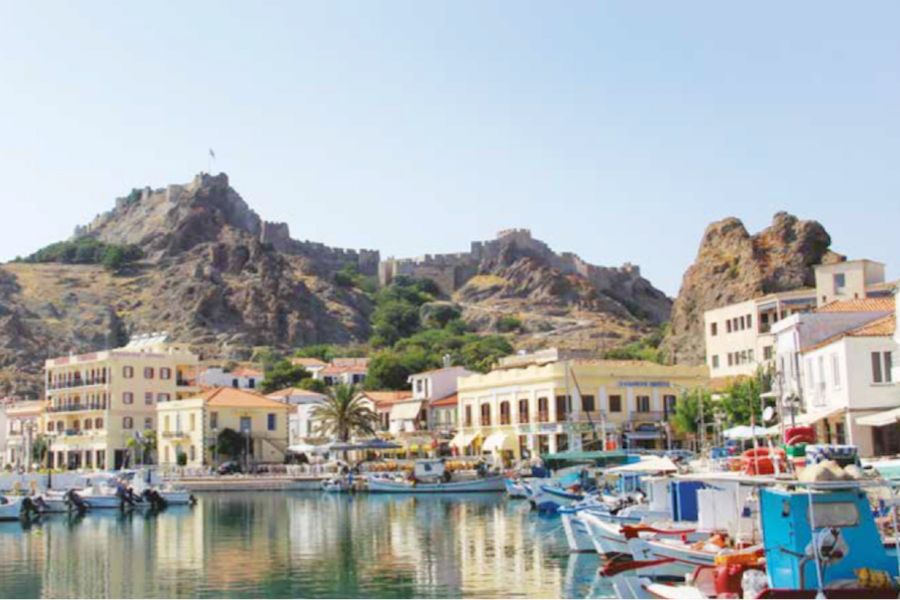 The current island’s capital has been thriving since the times of the Ottoman occupation. One of this lovely capital’s trademarks is the Castle that stands dominant on an imposing cape that divides the city into two shores. The garrison and the families of the Turks used to live near and inside the Castle - hence the name “Tourkikos Yialos” (Turkish shore). The other side of the Castle, around the Metropolis and its church- es, which is where the Greeks have settled, has been called the “Romeikos Yialos” (The Greek shore). Don’t hesitate to stroll around and to do your shopping at the market area, to make a stop so as to enjoy a nice coffee or a “meze” (small dish) at the best hangouts of the city center. 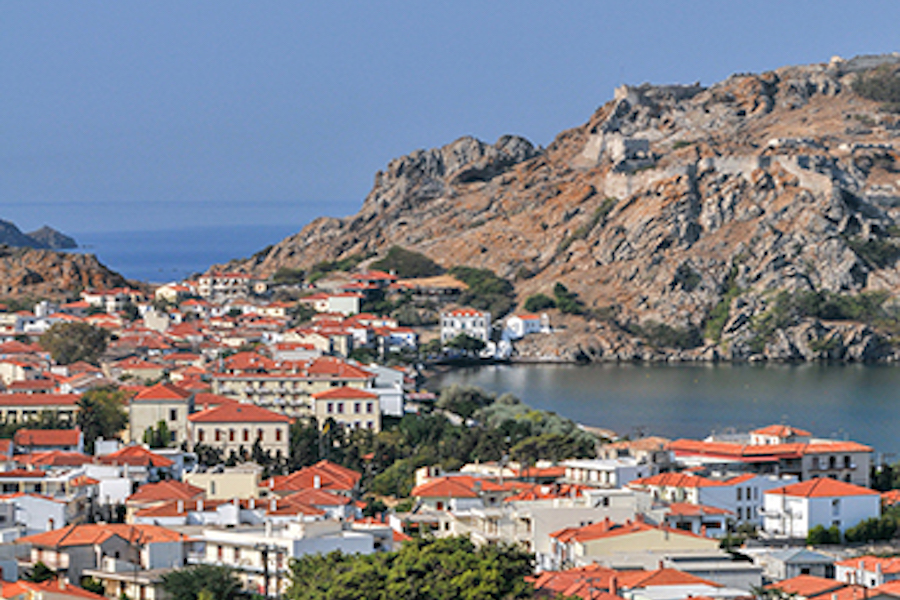 With approximately 700 inhabitants, Platy is located at the top of the bay in the southwest side of the island. It offers a sublime view of Mount Athos and an excellent sandy beach. The wider area of Platy has experienced, during the last 20 years, a remarkable development in the field of vacation hotel industry through vast reconstruction actions and the creation of many tourist enterprises. 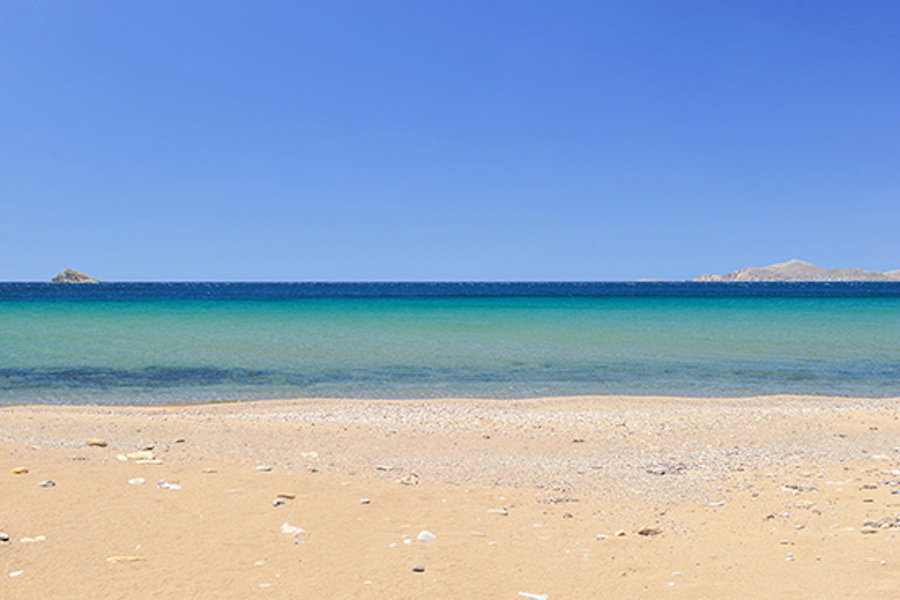 One of the oldest villages of Limnos with a long history that goes as back as the late Byzantine era. It is built amphitheatrically reminding of the mountain villages of Greece’s mainland. It has about 800 inhabitants and disposes a rich tradition in the production of sweets, pasta and other delicacies. 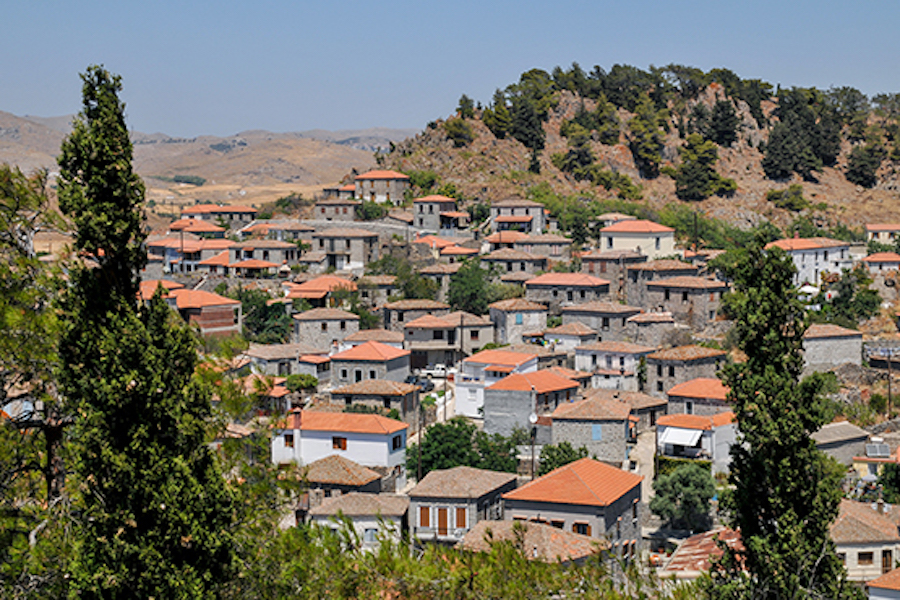 A traditional settlement, of the 14th century, with an authentic architectural beauty and finesse that are reflected on the village’s numerous renovated stone houses. With approximately 600 residents, Kondias is one of the most vibrant and restless villages regarding cultural initiatives as multiple events are being organized, including the organising of the Gallery which displays permanent exhibits of Balkan paintings. Among the many cultural initiatives is the complete restoration of the two old windmills located at the entrance of the village. 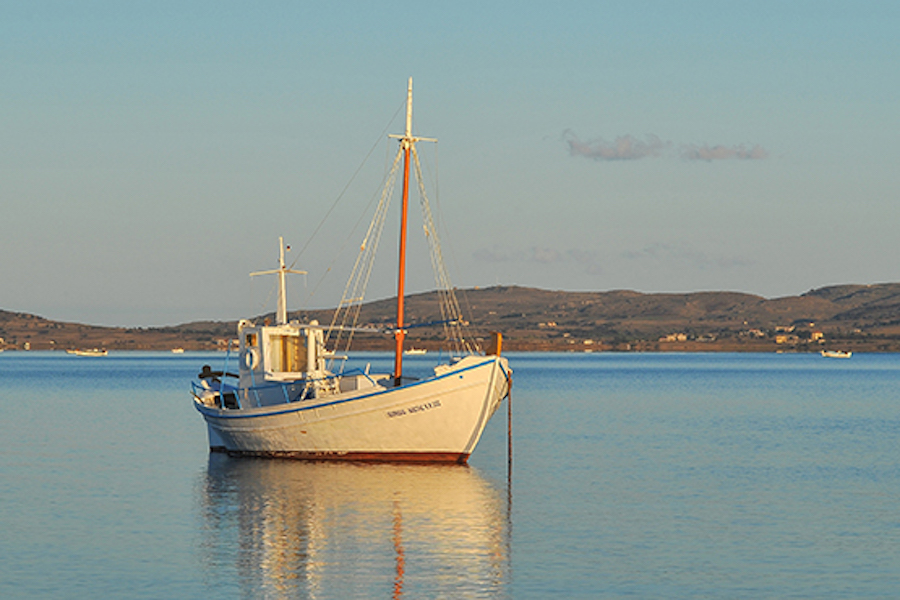 It is among the most recently constructed villages of Limnos, as it was founded just in 1926 in order to become the new home of the refugees coming from Koutali of the Propontis *area (today’s Sea of Marmara or Sea of Marmora). It was the homeland of the great Panagis Koutalianos (an unbelievably strong wrestler of the late 19th century). Resting under the shade of the small grove of Ayia Triada (Holly Trinity), this village stands out because of its excellent street plan, its wonderful colorful house gardens and its picturesque fishing port that overlooks the gulf of Moudros. N.Koutali has a long tradition in sponge fishing and disposes a respective Museum.
*Propontis (Sea of Marmara): a closed sea that unites the Black Sea with the Aegean Sea. It divides Turkey into the Turkish Asian part and the Turkish European part, thus separating Asia from Europe. 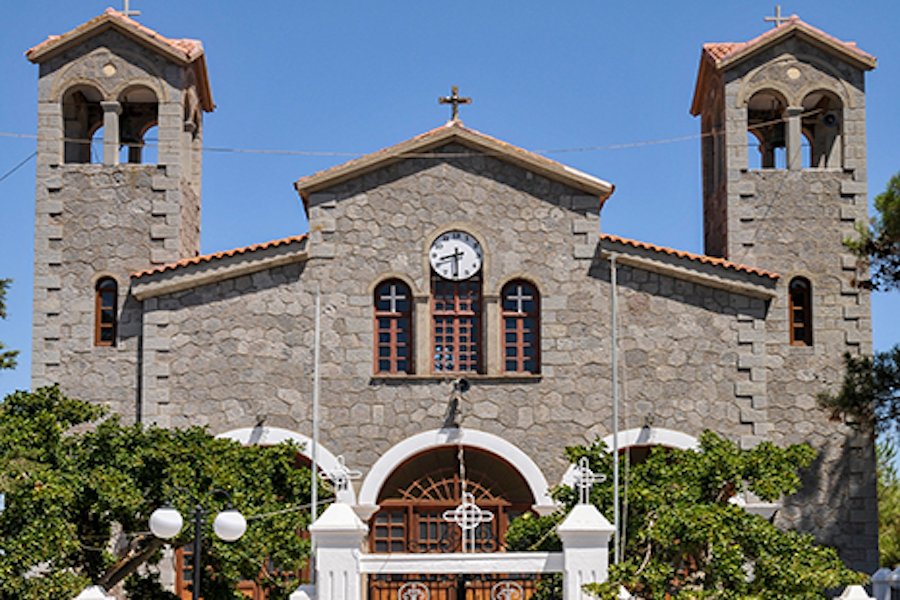 A village of almost 800 inhabitants, including the descendents of the Greek refugees that were viciously uprooted from the town of Reis-Dere of Asia Minor. (It is the second refugee village of the island, together with N. Koutali). Settling down in their new homeland, the Reis-Dere refugees became the main producers of grapes, wine and ouzo of the region. Ayios Dimitrios disposes an exceptional Greek-Asia Minor music tradition! The village is well-known for its vineyards and good quality grapes, hence the many “lakaria” (special distilleries for producing tsipouro) found in the area.
*Reis-Dere (Reïsdere in Turkish) was a town located at the peninsula of Erythrae, an Ionian city of Asia Minor, situated 22 km from Cesme, Izmir. It is now Turkish territory. 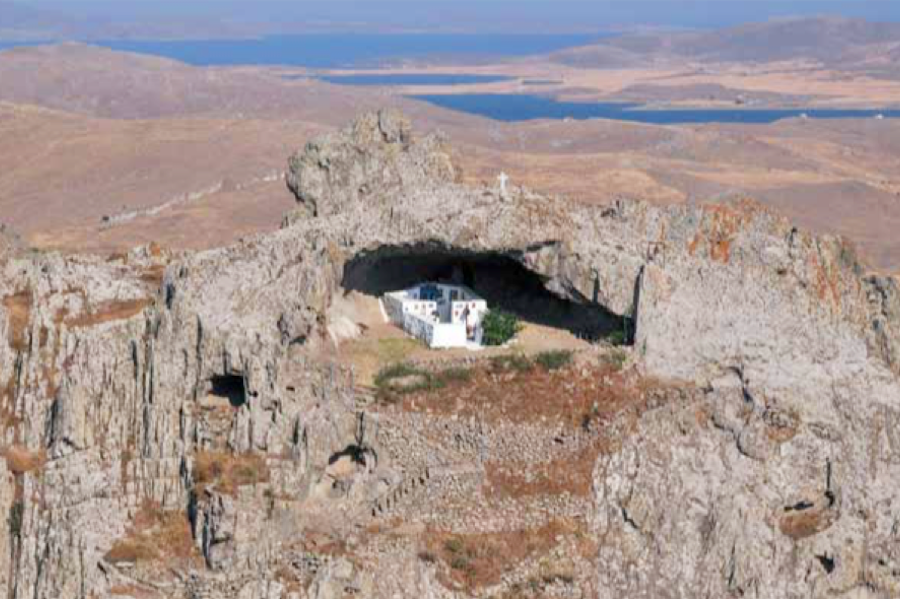 In the central plain of the island lies one of the most ancient and rich villages of Limnos, called Atsiki. Its name is believed to derive from the alteration of the word “Attiki” (Attica). This beautiful big village possesses the largest Bell Tower of the island, located at the Church of Ae-Yiorye (Saint George). Now days, this charming village has approximately 1000 inhabitants. It also offers an attractive getaway spot; the beach of Ayiarmola. Atsiki’s Cultural Association is a tireless organization that arranges various happenings and events. 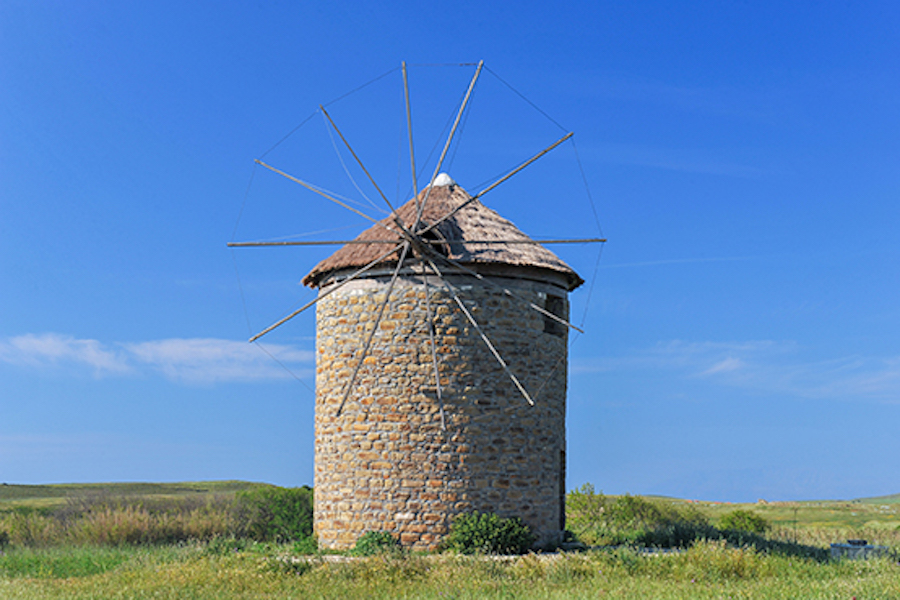 Moudros has its own particular charm. It rests at a remarkable location as its bay is considered to be one of the safest ones in the Mediterranean. There is a unique feeling floating around the picturesque harbour, with its fish taverns, which is recommended to visit so as to indulge in the afternoon laziness. It was here where the famous naval battle of Limnos took place. In Moudros, there is also a big War Cemetery for Allied soldiers in which, every year, an important memorial service and memorial ceremonies take place in order to honour the victims of the battle of Gallipoli (also known as the Gallipoli Campaign of 1915-16) . 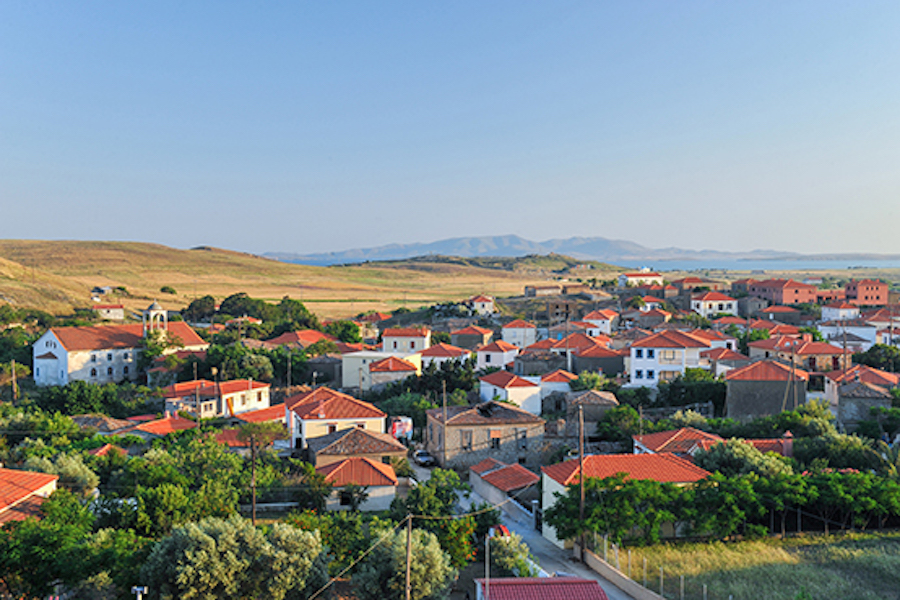 Counting 700 inhabitants, Kontopouli is among the villages of Limnos with the most galloping development. Kontopouli is located near the lakes Alyki and Chortarolimni. Its stone houses, courtyards, dry vegetable gardens (where anhydrous cultivations are performed), a wonderful Church, a traditional ceramic workshop and a great environment create a dreamy entirety. It became particularly known as the place of exile of, two times Nobel price nominee, Greek poet Yannis Ritsos.